We Are Twins! by Sylvia Pagán Westphal 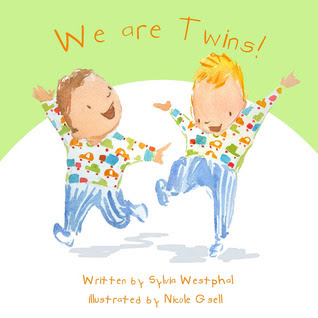 Sam and Ben are twin brothers. In this book, aimed at children between the ages of 1 and 4, we discover the differences and similarities of twins and how they are most certainly not 'two peas in a pod'.

I am a nanny and my charges are twins. They are a boy and a girl so they aren't saddled with many of the stereotypes typically associated with twins but we get our fair share. If I had a pound for every time someone says to me 'double trouble' then I would be a very rich woman. Some people seem to leave their brains behind when talking about twins. I have been asked whether they poo at the same time, whether they learned to walk at the same time. Some people find it very hard to get it into their heads that even though twins may have shared the womb together, were born on the same day, may often have a bond that non-twins can't even imagine, they are two different people.

I enjoyed this book because it addressed this common misconception. It looked at how twins can look differently, behave differently, have different skills and they are all viewed positively, ''I love blocks and can build towers so high they reach Papa's knees!' (Sam) 'But I would rather kick a football with Papa and say "Goaaal"!!!'' Some children are mathematical, some are more creative, some are loud and expressive, some are shy and quiet this book addresses that and says 'It's okay.' It also discusses how twins each have their own thoughts and think about things in different way.

The similarities between twins are also compared. Like any siblings there will be some things, whether nature or nurture, that they will have in common. The illustrations show the two boys playing closely together and I like how their bond is shown to be encouraged.

The book also contains a humour which I think will appeal to toddlers and young children. The illustrations were simple but bright and they accompanied the story well. Sadly, the Kindle version was badly done so the pages were a little mixed up and some of the illustrations were spread over five pages so that was a shame. There were also a lot of exclamation marks which I think were a bit impotent and quite annoying.

Overall I gave this book 3 stars, its very simple and doesn't have much of a story but it does its job of showing that twins are very different from each other.

We Are Twins! was kindly supplied by Netgalley and the publishers in exchange for an honest review.
Posted by Unknown at 19:33