I know, I'm terrible. I haven't written in so long but it seems to have been pretty hectic here. That's my excuse anyway! This post will just concentrate on catching up on some news. 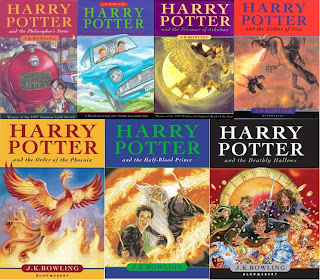 I'm currently re-reading the Harry Potter series and I am thoroughly enjoying them. Reading them now, when I am a bit older, the emotions and deeper aspect of the books are really hitting me. I find it amazing how the books 'grew up' with their audience. Harry Potter and the Philosopher's Stone is extremely simple in language and plot, it is a children's book. However, as the series goes on the books start to become more complex as they move into the young adult genre. J.K.Rowling has aimed for her audience to be the same age as Harry when reading the books (but her books obviously appealed to a much wider audience) and as they've grown up, so has he. I think it's brilliant how she's adapted her writing for the subtle change of age each year brings. I've just started on Harry Potter and the Order of the Phoenix. They are excellent and when I finish the series I am going to be mourning the loss all over again.

I am also MAJORLY excited because I'm going to the Harry Potter Studio Tour next week. Oh my god. I've got butterflies already! I can't wait, and there will be a full write up, including many pictures, on here so keep your eyes peeled.

I went home last week for a holiday, its was so nice to catch up with my family. I didn't do much, to be honest I'm pretty fed up with running up and down the county seeing everyone so this time I just spent time with my closest family. 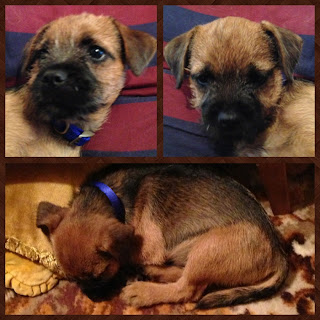 We bought my Gran a puppy! She's been talking about getting a dog for about four years but I don't think she's had the confidence to do it herself, it's a big step. So, when I visited her and she said again about wanting one, and that she likes Border Terriers, I thought 'right'. I went home and looked for Border Terrier puppies and there were three litters in Wales, about an hour to an hour and a half away from where my mum lives. We arranged to go and meet one family a few days later and came out with this gorgeous little man. It was complete surprise to my Gran, I don't think she knew what to say at first but she was so pleased. She has called him Oscar. He really is a lovely puppy, he was so quiet when we were driving him in the car. I get very regular updates on his behavior and how well his toilet training is going! She says she hasn't laughed this much in a long time, he's so funny. They are both very much in love and I am so pleased.

My brother and I took our dogs for a walk on the beach, well, near the beach. Dogs aren't allowed on some of the beaches in Pembrokeshire during the summer so we walked from Coppet Hall beach, along a walkway which is built on the side of the cliff going around the beach. There is a tunnel cut through the cliff so that you can get to Wiseman's Bridge beach. We walked through the car park to another tunnel which brings you you Saundersfoot. We walked around Saundersfoot harbour, had an ice-cream (of course) then walked back. It's only about three miles all together but it is such a beautiful walk. And being that close to the beach is always a winner for me. It was a hot day too so it was perfect, the dogs slept well that afternoon!


I've recently finished a big crochet project which has taken me ages, I haven't been keeping up with it all that regularly. It's such a satisfying feeling to finish a project, especially a large one, there'll be a post on it a little later in the week. To fill that crochet sized hole I have started my Christmas projects! I know, pretty early to be thinking about Christmas but I've got a few fiddly things I want to try which I think will take up quite a bit of time. Here's a little preview of what I'm working on -

Yesterday, Manon and I went to see Soul Sister. It's the story of Tina Turner's life with Ike Turner and features many of her songs. I absolutely loved it, it was a brilliant, sing along musical. My favourite kind. There'll be a full review soon.

The Great British Bake Off has started again, hurrah! It's one of the only things I watch on TV, it's brilliant and it's inspired so many people to bake. Saying that, the standard of their tasks are getting higher and higher. Some of the things which the contestants make are absolutely brilliant. I'm so happy that it's back to brighten up my Tuesday nights, especially now the nights are getting shorter. Follow this link to see one of the best pictures I have ever seen. You're welcome.

Well, I'm going to get ready for my date now, I KNOW! Off for a few drinks with a pretty nice guy so you may hear more on the subject soon.