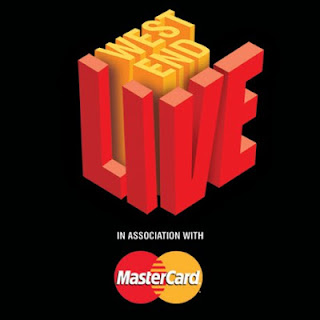 Well, what can I say? I think this was one of the best experiences I've had in London in over a year of living here. Basically, West End Live is an event in Trafalgar Square where musicals which are playing in the West End do a fifteen to twenty minute excerpt from their show. The first event was held nine years ago and just had four shows taking part, this year the event was held over Saturday and Sunday and had over thirty! Also, it was completely free! I always begrudge paying to do anything in London because there are so many brilliant things on offer which are free, I always give a donation of course.

I was up at 6am (after being out the night before and enjoying a few too many Friday vanilla vodkas!) and left the house at 7am. The gates didn't open until 10.30am but we wanted to be there early to avoid being at the back of the queues. We got to Trafalgar Square at about 9am and there were about 100 people in front of us. By 10.30am the queue had gone all the way down to the bottom of the square and right back up! There was another entrance on the other side of the square too with a similar queue. I knew the event was popular but I hadn't realised quite how popular.

We thought that we had found some really good seats at the back of the square on some steps. We could sit down and see the stage clearly. But, as soon as the first act came on everyone in front of us stood up and we couldn't see anything so we ended up having to stand too. The stage was raised so we could get a good view of it from the back and there were two big screens so we could see more detail. The filming was a bit sporadic, there would be a close up of an actor who wasn't actually singing at the time or it would show the actors faces when they were doing some awesome foot work but you could get the gist of what they were doing.

There were presenters from Heart FM who spoke in between the shows and they were a bit annoying at first but they did quite a good job of getting the audience involved and keeping their spirits up when the inevitable British rain made an appearance. For some reason there was a lot of dust in the air which kept flying into our faces. I tried not to think about it too much because I didn't really like the idea of inhaling thousands of different people's skin cells.

Let It Be - I was really looking forward to getting a preview of this musical using the songs of the Beatles because I love their music but I was so disappointed with this show. They just stood there with their instruments and sang. Badly. They absolutely butchered 'Help', and every time they spoke they had these terrible British/Liverpudlian accents which sounded so fake. I will give them a tiny bit of credit because they were the first act on and the audience was enormous but surely they're used to that from doing the theatre show everyday. A different band member sang 'Let It Be' and that was much better, the only redeeming factor of this show sample.

Once: A New Musical - This has been on my 'Find Out More' list for quite a while because I've seen some rave reviews about this musical and from what I saw yesterday I think its one that I would really enjoy. The music was lively and quite Indie style. There were violins which made me want to do a little jig (always a positive quality in violins I find). I was sad that their set was so short but this is going on the 'To Watch' list.


Wicked - I have wanted to see Wicked for ages. I've got the soundtrack on my 'Best of Musicals' playlist and I'm halfway through reading the book. One thing I will say is that some of the musicals that came to the show made such a massive effort, Les Mis had a big cast, Phantom of the Opera brought props, so I was pretty disappointed that the cast of Wicked hadn't even worn costumes. The Galinda/Glinda and Elphaba actresses came on stage in their everyday clothes with no green make-up. Saying that, their voices were incredible. They sang Defying Gravity and it sounded as if it was a recording.

Billy Elliott - I've seen Billy Elliott before and I thoroughly enjoyed it. Sad scenes mixed in with hilarious scenes, the perfect concoction. Sadly, there were some microphone problems during their piece so we couldn't hear most of the singing. The parts we did hear however were great and Billy's dancing always makes me watch in awe.

Les Miserables - I was a bit wary about seeing this. I always worry about seeing something I've enjoyed so much as a film on the stage. Will I be disappointed? Will the film be ruined for me? Will the stage show live up to the film? I have to say that this totally surpassed the film for me. First, Eponine sang 'On My Own' and I had major goosebumps, actually I had goosebumps throughout their whole set. I also cried. 'Bring Him Home' was sang beautifully, very strong and masculine but also soft and kind. The whole cast sang 'One Day More' and it totally blew me away. The effect of the cast on stage was incredible and their voices were fabulous.

The Phantom of the Opera - Everyone always raves about this musical and to be honest its never been one which has attracted me. They, of course, sang 'Phantom of the Opera' and it was good. They had made a massive effort with props and costumes, they'd even decorated the stage with candelabras. But it wasn't one of my personal highlights.

Top Hat - The actors danced beautifully and I was amazed at their synchronisation. They danced tap, which I absolutely love and I would have really liked to see more than one song. This wouldn't have been a musical which I'd book for myself to see but after seeing that I think I would. I suppose that's the best part of these sorts of events, getting a taste of new and different things.

Matilda - Now, this is a musical that I've wanted to see ever since it came out. I love the film and the music for this show was written by Tim Minchin. What could possibly be wrong with that? The little girl who played Matilda was called Christina Frey and she was absolutely amazing. Her voice was incredible and she acted so well, so comical and exaggerated. She also pronounced 'change' as 'tsange' which was very cute.

We Will Rock You - I've seen this show before too and I loved it. The storyline was a bit loose at times, it felt as if a lot of it had been written just to fit in with the music but, to be honest, you can't go wrong with Queen's music. I enjoyed the whole singing and dancing atmosphere in the theatre and this was recreated in the square. Everyone was on their feet dancing and singing along. They sang 'We Will Rock You', 'Another One Bites The Dust', 'We Are The Champions' and 'Bohemian Rhapsody'. The main characters voices were fantastic and they really got the crowd to join in. Hearing so many people singing 'Bohemian Rhapsody' is pretty overwhelming.

The Bodyguard - I've never seen the film version of this but I've quite fancied going to see the musical. After yesterday I probably wouldn't bother. I thought that one of the main singers was slightly off which was a pity. But they did sing 'I Wanna Dance With Somebody' which won me over a little bit.

Jersey Boys - I thought that this would be right up my street with their choices of songs and I was right. This is definitely one which I want to see now. They sang 'Can't Take My Eyes Off Of You', a medley of 'Sherry Baby', 'Walk Like A Man', Big Girls Don't Cry' and 'Baby Goodbye', 'Beggin'' and 'Oh What A Night'. Their voices were so good and the harmonies were perfect, they sang such high notes at times! There were female singers too which mixed up the sound a bit and stopped you becoming too bored with the same voices.

Mamma Mia - This was another musical which I was a bit wary about seeing because I love the film so much but it thoroughly impressed me. They sang 'I Have A Dream', 'Mamma Mia', 'Dancing Queen' and 'Waterloo'. Their costumes were great, so colourful and fun. Also there was no Amanda Seyfried which is always positive for me.

Thriller Live - This is a show using the music from Michael Jackson. It was brilliant. First there was the Jackson 5 singing 'ABC' and 'I Want You Back'. Little Michael was so good, a great voice and dance moves plus cheekiness and attitude. I think that little dude is going to go far. They had a different person playing Michael for the different stages of his life and some of them looked like him so much. It wasn't just their costumes but their actual bone structure and features.

Burn the Floor - This is the musical with dancers from Strictly Come Dancing. They danced to modern, current songs and the dancing was electric and exciting. I didn't think I'd enjoy this one but I really did!

Sound of Music - This is one of the classic musicals so its pretty high on my 'To Watch' list. They are still rehearsing for the show to begin later this year. The nuns sang 'How Do You Solve A Problem Like Maria' and their voices were fantastic. Maria then sang 'My Favourite Things' and 'The Sound of Music' which were both beautiful.

Peter Pan: Never Ending Story - We were going to leave after the Sound of Music because we were so tired and hungry but one of the girls wanted to stay to watch this set and I am so, so glad we did. I think it was one of my favourite shows of the whole set. I excitedly announced that Stacey Solomon was playing Tinker Bell, forgetting that I was with girls from Canada and Holland and they didn't know who the hell I was on about! They sang modern songs like 'Forever Young', 'Angels' and 'Wild Boys' which sounds strange but fitted so well. The dance routines were quite advanced but looked really good and the props they used were so beautiful. I'm off to get this soundtrack straight away.

We left at about 3.30pm because there was some lesser known shows playing and we were starving. We went to Spaghetti House and I had a chicken and spinach risotto which was delicious. We were all flagging by then but someone suggested we go for drinks so we were quickly persuaded to stay in Central London a bit longer.

We went to the Piccadilly Institute for cocktails (which have 50% off before 9pm woohoo!) and it was possibly the coolest place I've ever been. We sat in the Noir room and drank pretty potent cocktails which tasted like sweeties. We're going to book a proper table and get dressed up to go for one of the girl's birthdays in August and I'm excited already.

All in all it was a brilliant day. I met some great new people and had a wonderful time. We got home at about 9pm and I went straight to bed after putting some aloe vera on my sunburn (I know, we had about 15 minutes of sun the whole day!!). Great, great, GREAT day.